Posted at 20:18h in Uncategorized by Tony Floriani 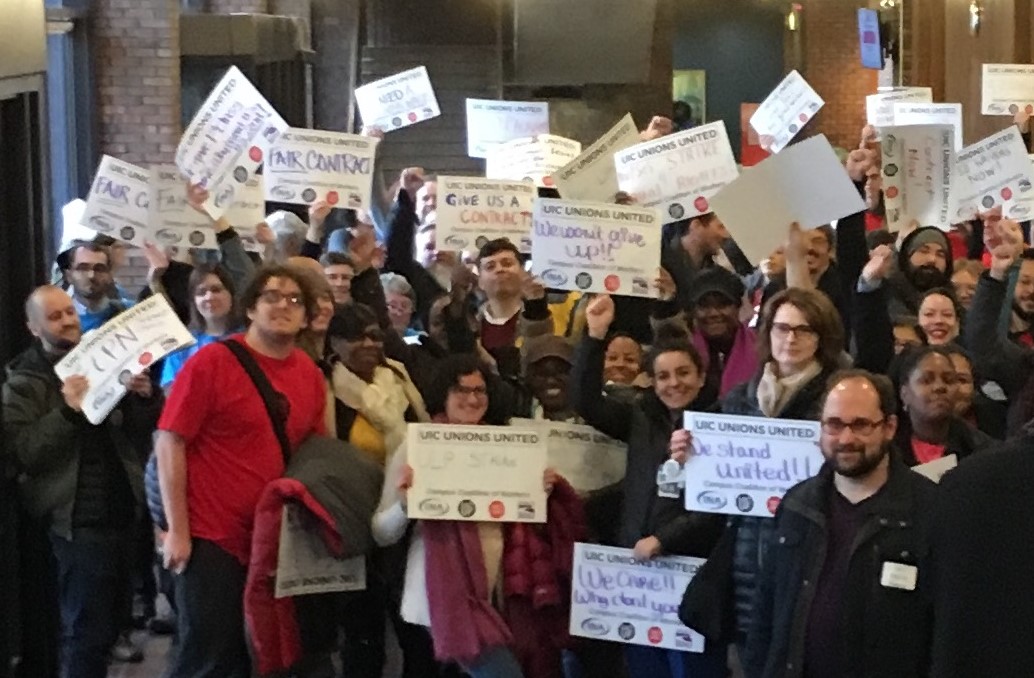 Members of 4 UIC Unions rally against Rauner-Era union busting tactics at the Board of Trustees meeting in Chicago.

In a powerful display of labor unity, this morning scores of UIC workers from four campus unions gathered at the University of Illinois Board of Trustees meeting to protest the University’s recent labor law violations and to demand fair contracts.

Since the Supreme Court’s Janus v. AFSCME decision this summer, the University administration has illegally attempted to implement new dues deduction processes, while simultaneously trying to impose second-rate contracts on the Licensed Practical Nurses (LPNs), faculty, and graduate student workers. Thirty-four LPNs from the UI Hospital began an indefinite strike this morning to protest these unfair labor practices and to demand a fair contract.

Following Bruce Rauner’s overwhelming defeat in last week’s election, the unions are calling on the University Board of Trustees to abandon its Rauner-era anti-union, anti-worker agenda.

At a press conference immediately after this silent protest, leaders and activists from all four unions spoke.

“Everyone knows that 34 primarily women of color provide some of the most hands-on direct patient care to some of the most impoverished communities in Chicago,” said Ramona Morales of the INA. “However, UIH has decided to show blatant disrespect to us and the communities we serve by demanding we accept a second-class contract with watered-down or non-existent protections.” Morales is an LPN in Outpatient Dialysis, has worked at UI Health for 18 years, and is on strike.

“UIC United Faculty stands in solidarity today with this union coalition because we are committed to making UIC an even better place to work and learn,” explained Janet Smith, president of United Faculty. “However, to do that, we believe the Board of Trustees needs to lead in changing the anti-union culture in the UI system. Union members should not have to strike like the LPNs are today, like UIUC grad students had to last spring and like faculty in Springfield the year before, in order to get a fair contract. We know there is a better way. “

“UIC wouldn’t function without the labor of grad workers, yet our baseline salary is only $18,000 and the University requires us to pay up to $2,000 in annual fees,” said Jeff Schuhrke, co-president of the GEO. “That’s over ten percent of our income going right back into the employer’s pocket. We shouldn’t have to pay to work here. In our contract negotiations, we’re demanding substantial raises and fee waivers. But instead of listening, the UIC administration is trying to undermine our collective bargaining rights.”

“UIC’s attempts to unilaterally impose a new system for payroll deductions and revocations without consultation from the campus unions feels a lot like a Rauner move. Raunerism is a thing of the past,” said SEIU Local 73 president Dian Palmer. “We’re here to say, ‘UIC get with the program and stop stealing money from unions by immediately correcting payroll codings, cease & desist from improperly honoring revocation requests made directly to the employer!’”