Ending this Semester’s Bargaining with a Bang

19 Dec Ending this Semester’s Bargaining with a Bang

Posted at 21:20h in Contract Bargaining by Tony Floriani 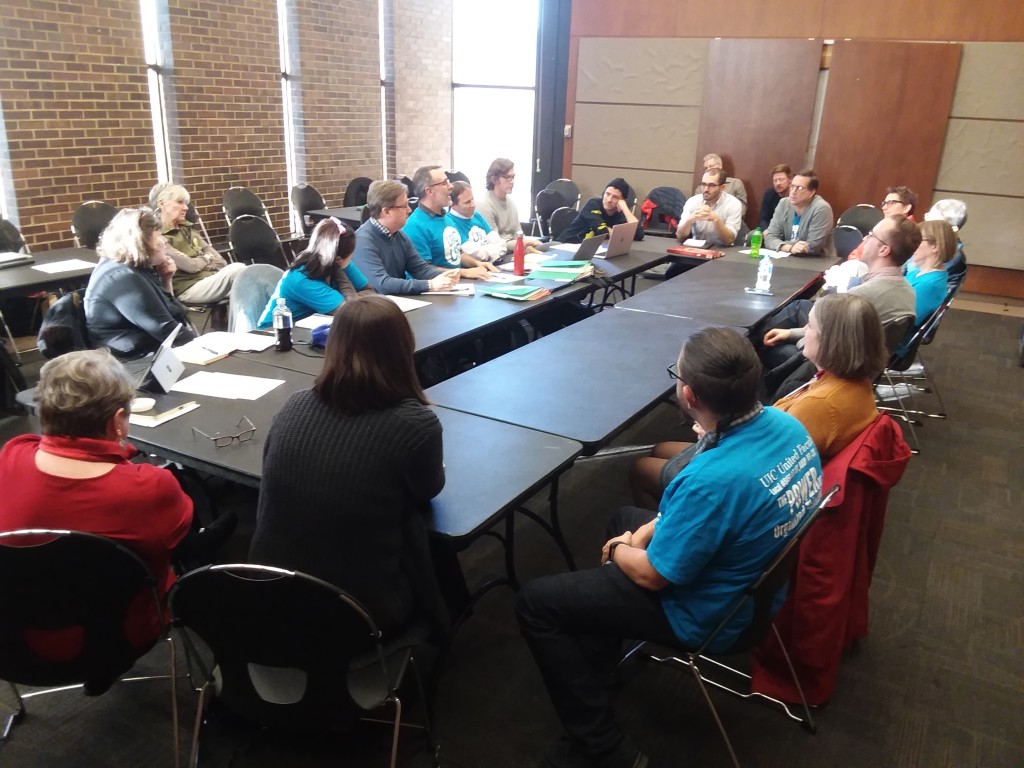 UIC United Faculty’s Bargaining Team caucusing with our members during a break in negotiations.

Tensions Boil Over (and Why That’s Okay)
It’s no secret that as time wears on, our bargaining sessions with Administration are becoming more contentious. The Administration team, for their part, appear perplexed with the pace of negotiations, claiming the ball is now completely in our court. Yet, they fail to even acknowledge the bulk of our proposals, choosing simply not to offer written counters despite demanding numerous rewrites from our side. This is not how we – or most people for that matter – bargain over a complex and nuanced written contract. In addition, faculty are frustrated with the low-ball salary numbers we’ve been given. That sentiment has only been exacerbated by claims that the Administration has no money available for more, because they have to choose their battles when seeking funding from the system. In translation, that seems to mean that they’ve chosen to pressure the union into accepting their meager merit raise offer, rather than ask the U of I system to adequately fund faculty salaries at UIC.

With all of these misgivings swirling about, it was hardly surprising that the situation exploded Monday, in plain view of the nearly 30 faculty members who came to observe the proceedings. Faculty members, who testified on a range of issues, expressed their distaste for what they see as Administration’s time-wasting and contrarian bargaining tactics. The Administration team, in turn, accused UIC United Faculty of acting and bargaining like a group of assembly-line workers, a shockingly tone-def attack on our identity as workers.

Barbs were exchanged. Voices were raised. A recess was called. And then we all came back to the table and got on with the tough business of negotiating.

It may sound crazy, but that’s okay. Some things needed to be said, and we feel the bargaining process will proceed, if nothing else, more honestly for having this frank exchange.

In the aftermath, we feel that we have now made it very clear that we are unimpressed with the contention that Administration’s hands are tied on funding faculty raises. We also think they have finally gotten the message that we don’t intend to walk away from our non-economic priorities. This was underscored by faculty speaking their minds, and making sure concerns about workload and other matters are taken seriously.

Governance is Not a ‘Management Right’
One faculty member’s testimony, in particular, poignantly addressed the fine line between governance and management. Historically, faculty have enjoyed shared governance in US institutions of higher education, meaning that they advise on matters affecting their work, and have a direct say in areas like curriculum. Lately though, some UIC administrators have been appropriating exclusive rights over what faculty feel should fall into the realm of shared governance.

Workload is a prime example. Administration believes that assigning work is a management right, and to some extent that may be true. However, UIC United Faculty contends that setting standards for such assignments should be a collaborative process in which shared governance is applied, working through the unit’s advisory or executive committee. A Dean may ultimately make the final decisions, but shared governance means that faculty are consulted. It means that faculty have input. It means that faculty have a voice, even if it is not the final say on the subject. And having a voice does matter!

As an immediate example, faculty in Applied Health Sciences last year were faced with a unilateral decision by their Dean to increase their course loads without a corresponding increase in pay. With the union’s help, they were able to push back and re-engage the process of shared governance, before the new policies took effect. Their voice mattered, and using it made a difference, even if final decisions technically still lie in the hands of an administrator. Such critical decision-making, however, shouldn’t have to rise to this level of imposition and outrage for faculty to be consulted, which is why our proposals on expanding shared governance matter so much.

A Silver Lining
With so much tension in the room, we’re actually fairly pleased with the outcomes. Administration, to their credit, came back to the table after our recess, offering to submit a written counter to our workload proposal. That matters because, to date, Administration has been keen to point out why they think our proposal language doesn’t work, but won’t accept rewrites they themselves asked for, and won’t offer their own. Getting counter proposals in writing has been something the union has pushed for since the earliest days of bargaining, and now it appears we will get that.

Next Semester
This was our last meeting of the semester. We will resume after the break at a date and time to be determined. However, we do have one imminent event which you should keep in mind for January. On January 31st, the U of I Board of Trustees will return to UIC for another board meeting. Administration negotiators have squarely pointed to budget constraints as a reason they won’t offer more robust salary figures, and the Board controls that budget. You can do the math here on your own, we’re sure, but suffice it to say, the union will be looking at possible activities around the board meeting on January 31st. We figure the Trustees may need to be reminded that faculty aren’t going to accept raise figures that fall below inflation, while massive administrative bonuses and capital development are being funded without a care.