Giving Tuesday: Admin Asks Faculty to Give Up on Raises

29 Nov Giving Tuesday: Admin Asks Faculty to Give Up on Raises

Posted at 16:44h in Contract Bargaining by Tony Floriani 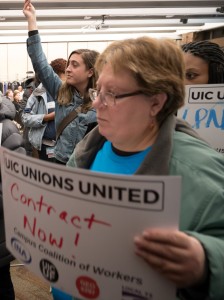 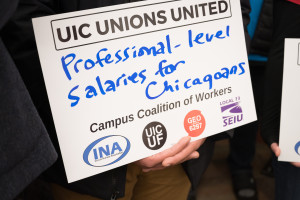 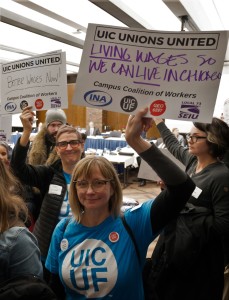 U of I Administration: Not in a Giving Mood
It’s been said that bargaining ideally is a give and take. No one gets everything they want, but everyone should walk away feeling like they’re getting something out of the agreement. U of I Administration seems to have missed the ‘give’ part of that equation this Giving Tuesday, however.

This past Tuesday, our bargaining team met once again with Administration, for the 12th time since beginning negotiations 23 weeks ago. We duly expected a response to the comprehensive proposal we’d handed them almost a month ago, and especially after over 100 union members demonstrated for fair contracts last week, we hoped it would at least be a decent starting point. What we got, however was not a counter proposal so much as a provocation.

As a reminder, UIC United Faculty has offered proposals that we feel are reasonable by any definition, including those asking for salary increases that catch up for lost growth during the budget impasse, and keep up with inflation over the life of the contract. We also proposed flexible solutions to critical areas of concern for faculty, including workload definitions, discipline procedures, use of student evaluations, and much more.

Administration’s response to these proposals left us hanging in almost every category, but here are the most concerning:

That’s right, Administration appears to expect faculty to tighten their belts and agree to a contract that will leave almost everyone objectively poorer than they were last year, even as they sign off on massive building projects and administrator bonuses.

Compounding this brazen approach to faculty compensation, the Administration team has offered nothing but indifference to concerns over workload policy, which we’ve proposed be handled as an issue of shared governance by departments. Administration’s taking on this stance, despite knowing that unilateral workload increases have already happened in one college and been attempted in several other departments, signals to us that they not only accept it, but expect to assign heavier loads in the future. And to round things out, regarding the vast majority of our remaining proposals, Administration has commented only to decree that they don’t think any of it belongs in a labor contract.

UICUF Demands a FAIR CONTRACT NOW!
UIC United Faculty did NOT come to the bargaining table 23 weeks ago to be handed a take-it-or-leave-it, status-quo contract. Even as a first offer, this counter-proposal is, at best, tone deaf to the needs of the faculty whose teaching, research, and service, power this university. As a union, it is our duty to fight for better salaries and working conditions in our contract, and this most certainly is not it.

UICUF plans on showing the Administration, and the public, what we think of this kind of behavior. If you are a faculty member at UIC, and you think you deserve better than stagnant salaries and indifference, now is the time to step up and take action. Here are a few of the ways you can join us in demanding a FAIR CONTRACT NOW:

Please RSVP to UICUFJeff@gmail.com if you can participate in any or all of the above activities!