Posted at 19:35h in Uncategorized by Tony Floriani 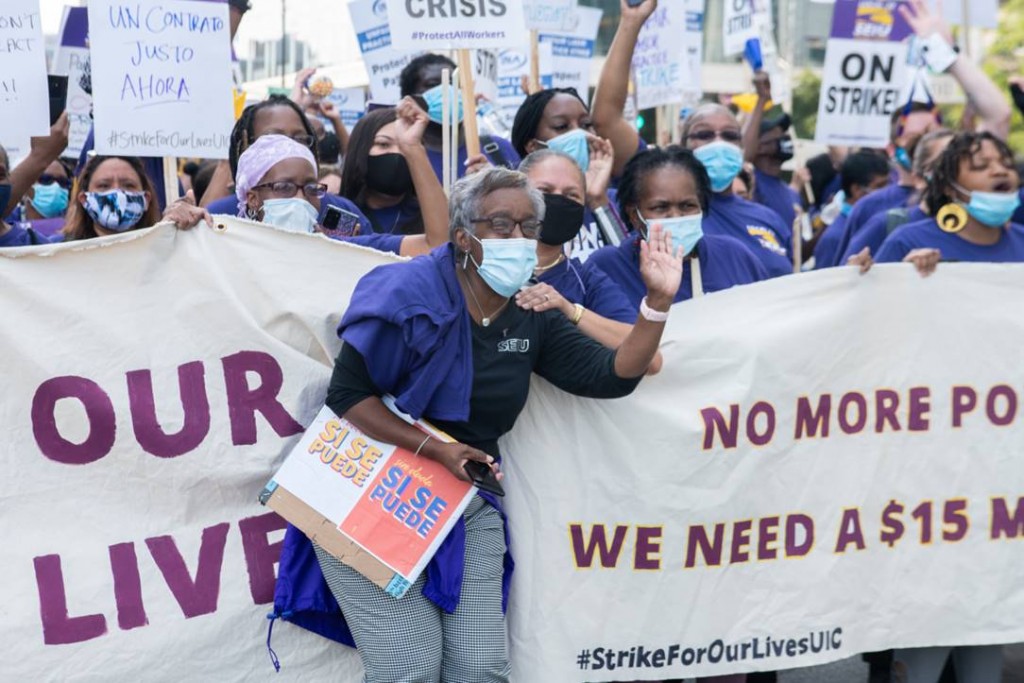 At the time of this writing, we are excited to inform you that SEIU has won fair contracts for each of their four bargaining units at UIC! The agreements, finalized late yesterday, mark the culmination of over a year of contract negotiations, and the end of the union’s 10-day strike that mobilized more than 4,000 members to withhold their labor. These workers, deemed essential, and hailed as heroes by UIC, were forced to go on strike to win the professional respect and treatment all workers deserve. The agreement reportedly includes:

Though the strike is over, SEIU members say they are more strongly united than they have been in years. The union membership will now vote on ratifying the contract, and have already committed to carrying their renewed strength into mobilizing support for the elected officials who supported them.

Meanwhile, INA, the union representing UIC nurses, ended their planned 7-day strike over the weekend. They are still negotiating their contract, but members say they have made more progress since authorizing the strike several weeks ago than they had over all the previous months of bargaining.

Victory on Intellectual Property Rights
This week, after significant union pressure, UIC Administrators approved an extension to their temporary policy protecting faculty IP rights when accepting ION and Course Builder assistance. UICUF had raised the alarm over the administration’s reluctance to extend the policy, which asserts that accepting such assistance under normal circumstances would entail faculty giving up licensing rights to their course materials, while creating an exception only for fall semester.

The extension of this policy exception is a victory for faculty who have justifiable concerns over the rights to their course materials, allowing us to sign-up for course prep assistance with peace-of-mind, knowing we are not inadvertently giving away our rights. It is, however, only a temporary solution to an issue that is clearly going to continue resurfacing. We will continue to call on the administration to make explicitly clear where the university believes its licensing rights extend, and to commit to informing faculty before they make decisions that may impact those rights. We view transparency on this issue as not only a matter of fairness, but also a legal imperative that we will fight for on behalf of our members if necessary.

Voting Plans and The Fair Tax
As we’ve written in the past, UIC United Faculty has endorsed the Fair Tax proposal which you will see on your ballot this general election. The Fair Tax and its accompanying legislation will objectively lower state income taxes for the vast majority of our members, while providing an overall tax boost to pay for critical state-funded services, like the University of Illinois system. We encourage you to vote YES for a Fair Tax for Illinois!

Meanwhile, to ensure that you are able to vote and have your vote counted in good order, we recommend starting by creating a simple voting plan. This can be as minimal as confirming the place and time when you intend to cast your ballot, and putting a reminder on your calendar. You may also wish to confirm that your voter registration is up to date, and/or research the candidates and questions that may be presented on your ballot. You can find information on voter registration, voting locations, and more at www.elections.il.gov/.

We issue regular updates via email, Facebook, Twitter, YouTube, and on our website. We encourage everyone to like and follow us on social media. If you want to contribute your story, pictures, video, or other content related to the activities of the union, email us at UICUnitedFaculty@gmail.com. With your support, we are making UIC an even SAFER place to work and learn!