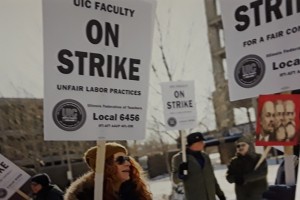 We unfortunately must tell you that one of our dedicated comrades has fallen. Richard Levy, who taught in the History department for 49 years, and who only recently retired at the age of 80, died this summer.  It was an immensely sad moment for the department, because Richard was such a lively, committed, and truly funny presence.

Richard was one of the world’s major historians of antisemitism, and he was also a totally dedicated union member.  He threw his whole professional self into UIC, and he recognized that the union fought not just for better wages for faculty, but for a better institution for our students.

A few years into his seventies, Richard proudly went out on strike with us in 2014.  Indeed, he proudly had this picture on his office door in University Hall until his death.  Richard is the one on the right, holding high the banner of Lenin, Engels, and Marx.

We will miss him hugely.  But don’t mourn, organize!

Richard will have a UIC memorial service in the Cardinal Room of Student Center East, (750 S. Halsted St.) next Wednesday, September 29th, at 3:00 p.m.  All are welcome.