What Our Labor is Worth

07 Nov What Our Labor is Worth

Posted at 20:11h in Contract Bargaining by Tony Floriani 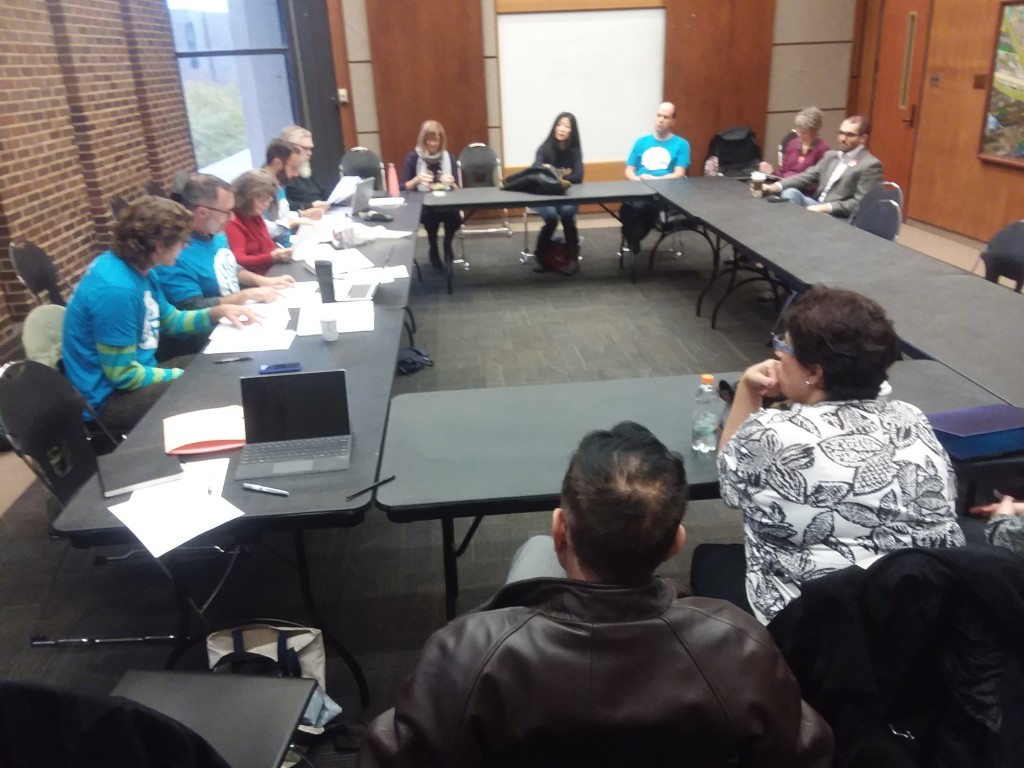 UIC United Faculty members caucus with our bargaining team during a brief break from contract negotiations.

It’s Not Just About The Money
UIC United Faculty met once again this Monday with U of I’s negotiating team to continue advocating for a better faculty contract. Last session, we presented our full, comprehensive proposal, which included all of our economic proposals. While we did not receive counter proposals on those items, the Administration team did engage us on questions they had around issues ranging from PD funds to office space.

We can’t share specific language or numbers associated with contract proposals still being discussed, but we do want to remind our members of our core goals going into this negotiation. From the beginning, we’ve aimed to address issues around:

To reach these goals, we have proposed an array of measures that would improve working conditions, and are now adding items to address salary concerns across the board. “The last time we negotiated a contract, we were contending with budget austerity and hiring freezes,” explains Aaron Krall, Co-Lead Negotiator for UICUF, “but we’re in a different economic era now.”

These are just a few of the things we intend to fight for, so that UIC faculty can continue to grow in and contribute to their academic communities, while prospering alongside the community they serve.

After Months of Resistance, U of I Recognizes Basic Nondiscrimination Protections
Meanwhile, we do have some good news to share. While we can’t say when our Administration counterparts intend to bring counter proposals on our economic items, or what those proposals will look like, we did see progress being made in other areas.

We are happy to say, we now have a tentative agreement on one of our earliest proposals, on nondiscrimination protections for our members. We brought this article up in the very first bargaining session expressly because we felt it would be common sense to expand protections to vulnerable communities, like non-citizens. Given the disappointing and dangerous turn in the national political climate around such issues, we believed it was a no-brainer to position UIC as a leader in protecting our community. U of I administration obviously didn’t see it that way on day one, and it has taken them 11 negotiating sessions to come around on what we consider to be the most basic protections we could ask for.

While this is certainly a victory for faculty and the UIC community, the staunch resistance Administration put up leads us to suspect that nothing is going to come easily out of this process. We are continuing to have useful discussions around raises and other economic issues, but we are also preparing for every eventuality, and intend to continue raising the pressure on Administration. We will keep pushing forward until we win the best contract we can, for our members, and for the UIC community as a whole.

Take Action: Union Rally at Rare Board of Trustees Visit to Chicago
Given the overall slow progress of negotiations so far, we feel compelled to raise our concerns in front of a larger audience. Next week, Thursday, November 15th, the U of I Board of Trustees will be at Student Center West for one of their rare Chicago meetings. We, alongside our fellow UIC unions, will hold a rally and press conference to show the Board that we will not stand by and be railroaded with a take-it-or-leave-it contract. We will also be joining our fellow workers in the Licensed Practical Nurses bargaining unit, who will be going on strike for their own contract the same day.

We highly encourage our members and allies to attend one or both of these events on the 15th. If you are able to join us, please RSVP to UICUFJeff@gmail.com.